skip to main | skip to sidebar

Just a quick layout update, here are a couple of pages I managed to get done yesterday. Scrapped with my girlfriends, but spent more of the day consoling cranky children than actually scrapping! Had the first page done by 10am, but it took me until about 4pm to have the second one finished. Never mind, at least I got SOMETHING done. 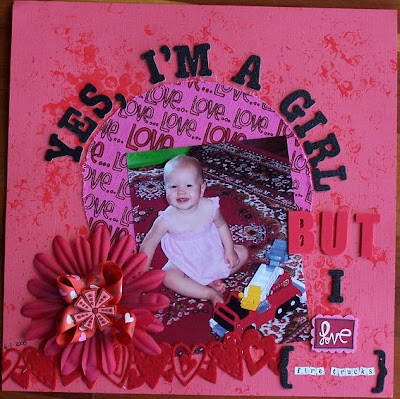 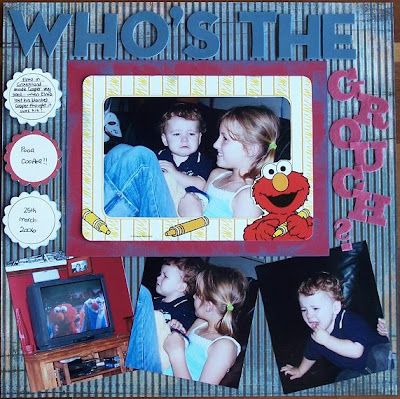 I've been struggling with the decision of breast or bottle lately...the last week has been a real struggle for me emotionally and physically. I'm feeling absolutely drained, like I have nothing left to give, I'm getting hardly any sleep and I'm cranky all the time, my head is pounding non-stop which could be caused by lack of sleep or the fact that I seem to be yelling all day. I'm not in a very good place and only said to Daniel this morning that 'existing' at the moment is an effort! Just as I decided this morning that enough was enough, Bronte has been really good this afternoon, fed well and has slept for a few hours. Now, once again, I'm in two minds. What to do?!

Can't believe my baby girl is over a month old already, she'll be six weeks this coming Friday. Here is a pic of her on her 'month day'. 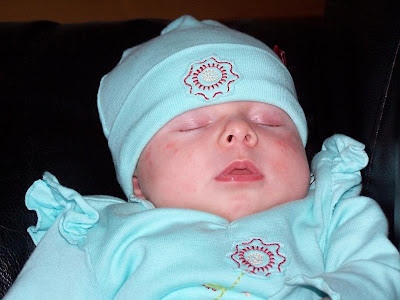 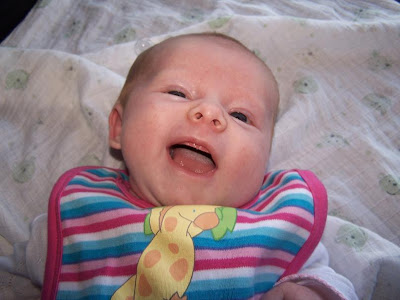 Yesterday we had the most awful day ever. It started off well with Daniel & I taking our little family to see Disney on Ice. The kids had a ball, Cooper loved everything and Georgie had so much fun, but got a little bit bored towards the end. We made it right to the end of the show before chaos struck. I had been holding Bronte and put her down on the seat next to me so I could pack up all our stuff, Daniel was holding the seat down as it was one of those seats that flip up when you're not sitting on it. Anyway, I bent down and started picking up everything off the floor when Georgie decided she had to get of Daddy's lap, and in helping her down Daniel accidentally let go of the seat. The seat flipped up and baby Bronte slid down between the seat and the wall behind it. I grabbed her straight away, she was crying so much. I just panicked and started crying myself, I didn't know what to do. On going out into the daylight I could see a bump and bruises already coming up on her head, at which point I totally flipped out, got really angry at Daniel and just turned into a blubbering mess. Daniel dropped me straight at the hospital then took the other kids home to my mum and sister, who were also a mess because I had called them in hysterics saying Bronte had to go to the hospital. I got straight in at the ER, and they checked her out straight away. Took us to a bed where the nurse did her obs, they did this a couple of times before the doctor arrived. The doctor was fantastic and so good with Bronte. He did a thorough check of her, and said that she was perfectly fine. No indications of anything out of the ordinary. Explained that at this age they are much less likely to sustain a head injury than say a two year old. So three hours after leaving Disney we finally got home. Daniel was supposed to be back at work yesterday but didn't go, of course. His work was really understanding about it though.

What a horrible experience, I just don't know what I'd do if something terrible really happened in my life, cause i just don't cope. And you know what scares me the most? How quickly shit happens. Everything can change in an instant and there is nothing you can do to stop it. I guess that is every parent's worst fear, isn't it?

On a brighter note, here is a layout I completed on Thursday night. I'm REALLY happy with it, but this photo of it just doesn't do it justice. The light is just off here today and I didn't want to wait another day before posting. I got inspiration for this page from one of the layouts on Julie Heard's blog, the 'show time' one. She is such an amazing scrapper and whenever I'm feeling mojo-less, all i have to do is check out her work and I'm inspired! 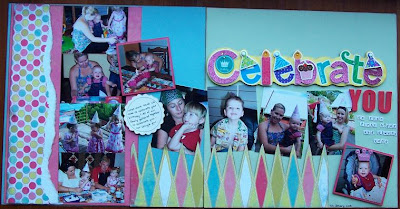 I had a lovely day today at the Illawarra Scquilters get together, everyone was very pleased to meet miss Bronte. Not much stitching done by me though...bit hard when running around after the kids!

Emma is here with me today and overnight tonight, she is such a big help to me and I just adore this kid so much. I enjoy every day we spend together. As do my children, she is their absolute most fave person ever!

We're hoping to make it into the scrap room tonight, but the its 4.30pm and the kids are still in bed after falling asleep in the car on the way home, so I'm thinking it may be a bit of a late night for them tonight. We'll have to see how we go. At the moment, foregoing sleep to scrap just isn't an option! LOL

Life is getting back to normal...

Well, as normal as its gonna be from now on!! My house is very hectic, it never stops, I don't know how mums with four or five or six or more kids do it, I take my hat off to you! I thought that it couldn't get much busier from two to three...but seriously, it is. There is always someone who wants something...my hubby compared it today to having your first again, with it being such a shock to the system and having NO spare time. With two I think they just fit in...but three, wow...what a change. In saying that, we're lucky as Bronte so far has been a pretty good baby...she is up a lot during the day and has a few crying sessions per day, but come that feed at night where the other kids are in bed, she goes to bed and stays there, only getting up during the night for one or two feeds and then straight back to bed. I'm only usually out of bed for 30-40 minutes and she has not fussed during the night once. TOUCH WOOD, I've probably jinxed myself now, LOL!!

I had a big day out last Thursday and went to the Sydney Quilt Show with my mum, my niece, my SIL and some friends, we had three breastfeeding babies in all so had a few pitstops along the way, but all in all everyone had a top day. I was once again blown away by the standard of the quilts, there are so many clever people around. One of whom is my big sis Nic who won quite a few awards including winning the category 'Best Use of Colour' and 1st prize in the 'Professional Machine Quilting' section. I'm so proud of her, she works so hard and deserves every ounce of recognition she gets.

Also bought a few new scrapping products which I can't wait to use!

I finally found a few spare hours yesterday afternoon to venture into the scrap room and start creating again, its been about a month and I've missed it so so much! I managed to do one page and get it finished, the first one I've done of miss Bronte. I'm pleased with how it turned out, especially after doing no scrapping for so long, I thought my mojo would be well and truly gone. 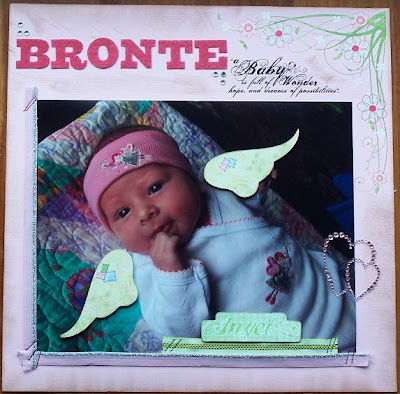 Well, best be off, bub is screaming for a feed, hopefully I'll be around a bit more from now on!
Posted by Sar at 3:28 PM No comments:

Sar
I am a mum of three, a very lucky wife of the best man there is, and I work nearly full time in Real Estate as a Property Sales Assistant. I love to spend time with my family, scrapbook my family, spend time staying fit & healthy, in between running around my very busy sporty kids. I am so lucky and blessed to be living this wonderful life. xx

How much do I scrap?

I find my inspiration here...